Star Wars is not often thought of in a literary sense, but if you've visited our mythology section you know that George Lucas created the stories using common literary elements. Heroes, villains, good versus evil, troubled families and mystical beings are just a few of these common elements that we find in many literary masterpieces. Although Star Wars is a film series, its content can inspire reading and writing across the curriculum.

To learn more about how you can incorporate Star Wars into your ELA curriculum, please use the tabs above to search for your desired content.

Hero Deeds and Slaying the Dragon

The next step in the hero quest is a challenge to mortal combat. The heroes experienced an initial rite of passage in the Death Star and accomplished the “princess rescue.” Now Leia leads Han and Luke to the Rebel base to plan an attack on the Death Star. Luke joins the fighter pilots of the Rebellion. As he puts on his uniform, he casts aside his youthful identity and assumes a new role: the heroic pilot, ready to sacrifice his life for the good of his cause. In the end, good triumphs over evil and the heroes are recognized for their deeds of valor. This moment is the end of one adventure, but it also represents the start of the next stage: further initiation on the “dark road of trials.”

Video will load in a new window.

The following resources were created by members of the Rogues!


Developing effective writing skills is important for our students. In the world of texting and social media, our written language is suffering (or being redeveloped, depending on your point of view) and the proper use of grammar is getting lost. Apart from this challenge, many students simply find it difficult to develop an idea of what to write when given the task. To help your students tap into their creativity, we encourage you to use Star Wars art to prompt students into writing creative stories. Find some samples below. More can be found on our Pinterest page. 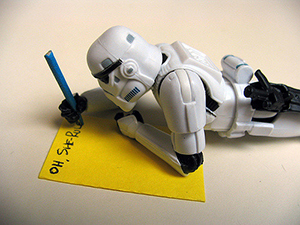 The Mystery of Kylo Ren's Lightsaber


Art for use as Writing Prompts

Questions to consider before writing:

In this section you will find current event articles that relate to English/Language Arts and Star Wars. Educators can use these current events to connect the events of Star Wars with the present day. The most recent social studies articles are shown below.

Fairy Tales Could Be Older Than You Ever Imagined

A few hundred years ago, fairy tale auteurs like the Brothers Grimm, Hans Christian Andersen and Charles Perrault helped bring magical tales of princesses, evil ogres, dark forests, weird spells and thwarted love into the storybooks—and to the bedsides—of children, everywhere. But how old are the tales they transcribed? A new study suggests that their origins go all the way back to prehistory.

Skywalker Ranch was a newly-completed filmmaking oasis in the late 1980s. Nestled amongst rolling hills of gold, bespeckled with live oaks and cattle, it was an environment wholly conducive to creative thinking. In June of 1988, courtesy of PBS, television audiences across America had one of their first glimpses of this hallowed locale. They watched journalist Bill Moyers and mythologist Joseph Campbell walking together in conversation with serene nature in the background, eventually making their way up the steps of the main house and into the library. It was the first episode in a six-part series, The Power of Myth.

We look to the stars and wonder. Light from infinite directions and distances meets our gaze. And within our “mythic imagination,” as Joseph Campbell described it, we begin to tell stories. As Campbell points out, the visual beauties that inspire a saga like Star Wars are derived as much from within us as it is outside. “The imagery is necessarily physical and thus apparently of outer space,” Campbell says, “The inherent connotation is always, however, psychological and metaphysical, which is to say, of inner space.” As we look to the stars, we are inherently reflected. It is what Campbell calls the “inner reaches of outer space.”

Heeding the Call: The Gift of Armor

One our favorite traditions in the Mandalorian Mercs Costume Club is to honor our allies and friends with their very own piece of Mandalorian armor, normally in the form of a helmet. Dave Filoni, Katie Sackhoff, Simon Pegg, Vanessa Marshall, and Tiya Sircar are just a few of the individuals we’ve been able to thank this way over the years. There’s a feeling of “awesomness” you get when you’re wearing a Mandalorian helmet, plus they work great for walking around conventions “incognito” (as Simon Pegg learned at San Diego ComicCon in 2013).

In ancient times, twins were a subject of curiosity. Perhaps society didn’t understand the science of birthing twins, or perhaps they were an easy comparison to the strange duality of the universe, but they have always been a large part of ancient and modern mythology.

Star Wars in Mythology: The Shadow

Carl Jung is essentially the great-grandfather of Star Wars, as Joseph Campbell included much of Jung’s psychological research in his work. Jung’s work highlights the concept of the collective unconscious, aspects of our psyche that exist for everyone. Jung theorizes that this collective unconscious is responsible for the common themes in our mythology, even across isolated, independent cultures. All were drawing from archetypes hidden in our subconscious, archetypes that are part of what makes us human.

The United States armed forces are not generally known to be staunch defenders of free speech, but that's the story that emerges from Molly Guptill Manning's fascinating new book When Books Went to War, a history of the American military's huge World War II program of printing and distributing books to service members. In 1944, with the presidential election looming, Republicans and Democrats in Congress fought over the details of a new system for tallying the troops' votes. When the Soldier Voting Bill was finally passed, Republican Senator Robert A. Taft quietly added a sweeping, vaguely worded amendment prohibiting the government from distributing any material that could be considered propaganda. For the military's Council on Books in Wartime, the amendment was a potential disaster for the popular program. The Navy protested that deleting politically offensive passages might "result in coloring the intent of the author" and giving the impression that soldiers were being presented with "half-truths." But the alternative—banning books outright—brought the council uncomfortably close to the Nazi’s vicious censoring of ideas that Americans were supposed to be fighting against.

Darth Scrooge: Greed and the Dark Side

There are many wonderful stories that encapsulate the Christmas spirit, and emphasize the potential for human goodness and decency. These stories are time-honored traditions in the month of December, and I’m sure many of you have favorites that are sacrosanct for you and your families. Perhaps there has not been a more retold Christmas story than the Charles Dickens classic, A Christmas Carol, featuring the curmudgeonly Ebenezer Scrooge. Upon recently teaching this class to my freshmen students, I was struck by the similarities between Scrooge and the correspondingly conflicted Darth Vader. Perhaps they are not as dissimilar as one might originally think.

As we approach Thanksgiving, we prepare for one of the biggest holidays of the calendar year. Family and friends gather from all around to share a meal. In essence, we eat together to establish unity, and this is an important part of building relationships amongst our brethren.

StarWars.com is excited to present an exclusive preview of Star Wars: Tarkin by James Luceno, a new canonical novel coming November 4. This excerpt features Darth Vader and his Master discussing the notorious title character, revealing more about the dynamics between the Empire’s most powerful figures. And be sure to check out a special look at the evolution of David Smit’s cover art in the gallery below.